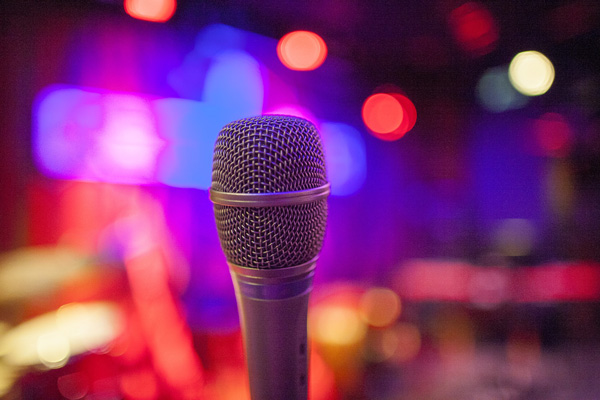 Slightly reminiscent of the 'old days' of communication, typically you'd hear the call 'testing testing' down the wires and into your ear or perhaps through the speakers at an event just after the exciting bump, buzz and clonk of the 'mic' being plugged into the live amplifier before the performance starts or as an 'important' message was about to be given. Personally, with sensitive hearing and some sympathy for the electrical aspects involved in connecting up the equipment, that horrible hum/buzz/clonk sound used to make me really cringe, mixed with some anticipation that if the levels were set wrong, some hideous squeal of feedback would burst out of the speakers all of a sudden at a sound level set way too high for the venue and occasion.

A number of times at various events, weddings, birthday parties etc., as well as, dare I admit it, when I was running a large mobile disco roadshow back in the ‘80s with my mates, I was often very amused by the sudden terror struck into the faces of the attending guests, dignitaries, newly weds and families etc., when their ears were suddenly and savagely assaulted by the most horrendous feedback blast when the amplifiers were switched on in haste without having the levels returned to normal, after having been left at high/very high from the last event.

On a number of occasions, this sudden excruciatingly piercing sound would results in babies bursting into tears, children screaming, adults (guests) throwing drinks over each other and the occasional granny or grandad placing a hand on their chest to check that their heart was still going after such a loud shock! Not to mention the number of occasions that I would be suddenly surprised myself and in being made to jump, bang my head on something that I was crawling around on the stage, whilst setting up equipment. Of course we'd laugh a bit about it and often have to profusely apologise to those present for making such a racket! This was followed of course by a live 'testing testing' message through the now correctly 'ish' set sound levels, which was always difficult in front of what was usually a live audience who were awaiting for the evening disco to start!

So the lesson we should have learned is that 'testing testing' is a very important and definitely, a most significant part of understanding, what and or how something is going to behave in real life. Accurately replicating the real life behaviour of the system or product and so on, essentially establishes what it's going to do when it comes into being a real thing.

In design engineering, the actual 'testing testing' process is now made up of many, many, often complex aspects of analysis. We fundamentally have the ability to assess in the virtual world the system, process and parts before we even consider committing to making something and with developing technologies we can almost touch, feel and handle the product in virtual reality before it even goes near the real life user.

However, using the occasional tap on the mic and muttered 'testing testing' into it, does still have a place in giving us the assurance that the thing is actually working and ready to be used!